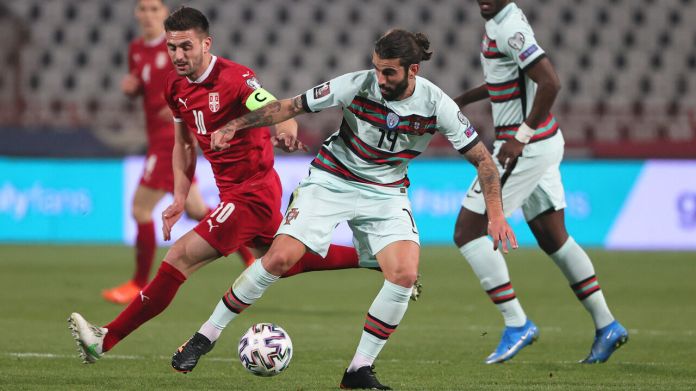 Surprises in the evening games of the World Cup qualification. The favorites Portugal and Belgium have to be satisfied with a draw in groups A and B respectively.

Portugal are already comfortably leading in the 2-2 draw against Serbia after an iota double in the first half (11th, 36th minute), but the Serbs don’t give up and with Mitrovic and Kostic equalize after an hour. In an exciting final phase, both teams fail to score, and the red card for Serbs Milenkovic (92nd) doesn’t change the final result.

The Belgians are also having a hard time against the Czech Republic in Prague and have to be content with a 1-1 draw. Provod gave the Czechs the lead with a nice shot from the edge of the box, but Inter-Star Lukaku equalized after 61 minutes.

In the final phase, both teams still hit aluminum, but no more goals are scored.

Luxembourg surprisingly defeated Ireland 1-0 thanks to a Rodrigues goal in Dublin and shot the Irish further into the crisis.

In the group A table, Serbia and Portugal remain at the top (both 4 points), while Luxembourg is third with three points.

With the draw, the Czech Republic defends the top position in front of the Belgians with the same number of points, both teams hold on to four points. Belarus are in third place after beating Estonia 4-2 in the early evening.

In addition, Slovakia did not get more than 2-2 against Malta in Group H. After 0: 2 deficit at the break, the Slovaks show morale and at least equalize with Strelec (49th) and Skriniar (53rd). After two matchdays, Slovakia was in group 4. but already four points behind leader Russia.

Learning gaps among students in Stuttgart: Read more, do arithmetic, do...

Coronavirus: Easings at Christmas are up for grabs

Coronavirus: These stars died after being infected

This is what you have to do to keep WhatsApp working...

The week starts with snow and slippery conditions in Berlin and...