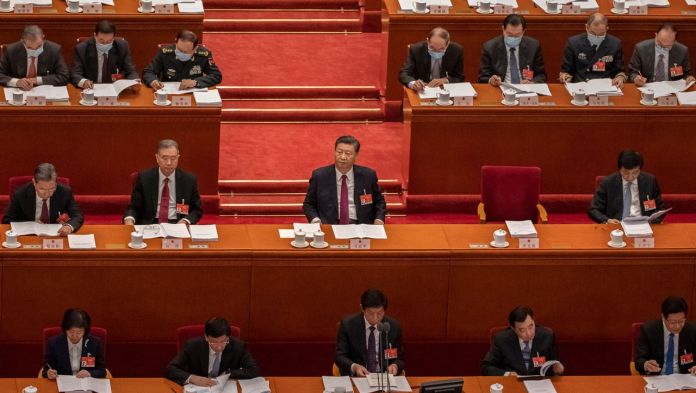 China’s head of state Xi Jinping is pushing for the national language Mandarin to also be implemented among minorities in the country. With a view to protests against a new language law in Inner Mongolia Province, Xi said at the national people’s congress in Beijing that the authorities there must “persistently” promote the promotion of Mandarin and correct “misconceptions” about nationality and culture.
Mandarin could promote national cohesion in the country, Xi said, according to reports from state media on Saturday. The authorities in Inner Mongolia should “solve the ethnic problems” and enforce the use of textbooks that are common throughout China. Last year, a controversial ordinance came into force in northern China’s province to completely replace Mongolian in textbooks with Mandarin.

Tens of thousands of people took part in demonstrations and school boycotts in protest against the law. Authorities threatened parents who no longer wanted to send their children to school in protest with dismissals and fines. In one district, the authorities even offered children financial rewards if they succeeded in convincing their classmates to return to class.

There are close ethnic, cultural and linguistic ties between the Chinese province of Inner Mongolia and the neighboring state of Mongolia. Critics accuse the Chinese leadership of forcibly integrating minorities into the majority population of the Han Chinese through their rigorous assimilation policy and of wanting to suppress or even abolish their cultural, linguistic and religious peculiarities.

The government in Beijing has come under massive international criticism, particularly because of its actions against minorities in the Xinjiang province and in Tibet.

Xi now said that the people of Inner Mongolia need to “learn by heart that the Han ethnic group cannot be separated from the ethnic minorities and that the ethnic minorities cannot be separated from the Han ethnic group.” The provincial authorities would have to “do a good job by” popularizing “the national language” – that is, Mandarin.

The state broadcaster CCTV showed video footage of the People’s Congress showing delegates from Inner Mongolia applauding Xi as he spoke on Friday.

During the People’s Congress, the Chinese Communist Party sets its economic and political priorities for the coming year (read more here). Taken legislative proposals are almost always adopted with an overwhelming majority by the thousands of delegates.

The Amazon rainforest is shrinking – 11,088 square kilometers cleared in...

Berlin & Brandenburg: State is not planning any further bonuses for...

Ten million euros for the Berlin film industry in the Corona...