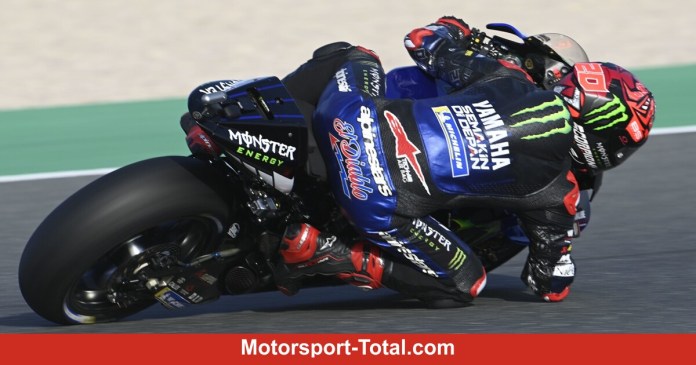 (Motorsport-Total.com) – The warm-up for the Grand Prix of Qatar 2021 ended on Sunday afternoon with a two-two Yamaha team. Fabio Quartararo set the fastest time with 1: 55.147 minutes ahead of his team-mate Maverick Vinales, who was 0.138 seconds short. Johann Zarco (Pramac-Ducati) came third.

At the start of the last 20-minute training session before the race, with 25 degrees air and 34 degrees asphalt temperature, it was not as warm as yesterday afternoon. However, there was a strong wind at times, which can be a problem, especially for the large machines with their aero elements.

The vast majority of the field started the warm-up with soft tires at the front and rear. Franco Morbidelli (Petronas-Yamaha) was the only one who opted for the hard mix on the front wheel. Danilo Petrucci (Tech-3-KTM) relied on the medium.

Jack Miller is late in the warm-up

The lead changed several times in the classification. At halftime, only two drivers, Pramac drivers Zarco and Alex Marquez (LCR-Honda), had recorded times below 1:56 minutes. Pole setter Francesco Bagnaia and his Ducati team-mate Jack Miller were still at the bottom of the table at the time.

Bagnaia had turned back to the pits after only two laps, Miller again hadn’t left his pits at all. He only started the warm-up at the beginning of the last ten minutes, while more and more drivers were setting 1:55 times.

In the closing stages, Yamaha took command. Quartararo and Vinales ousted Zarco from the lead and secured first and second places. Behind Zarco, three Hondas classified themselves with Alex Marquez, Taakaki Nakgami and Pol Espargaro.

The Ducati factory duo ended up surprisingly far behind. Bagnaia was still in 15th place behind Miguel Oliveira (KTM), almost a second behind. Miller was only 21st behind Valentino Rossi (Petronas-Yamaha).

Donald Trump surprisingly calls the press conference – directly from the...

Germany has decided on a “hard” lockdown – Coronavirus Vienna