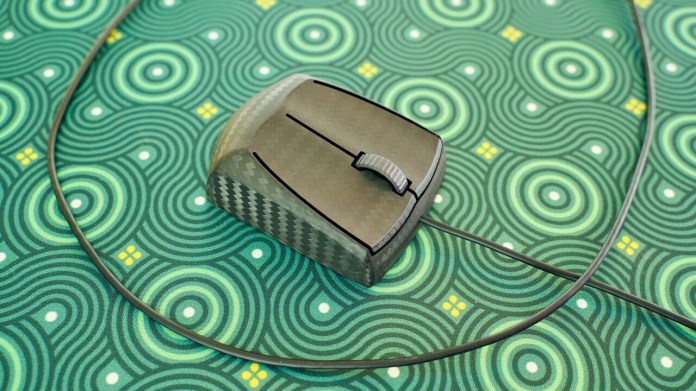 At the end of 2019, the German startup Zaunkoenig received attention with the ultra-light carbon mouse M1K (test). The puristic input device caused ambivalent reactions, not least because of the immense price; The lack of the otherwise obligatory mouse wheel was also criticized. The M2K can help here.

A very special mouse for a very small niche

Super-light fingertip grip mice for shooter players have been enjoying steadily growing popularity and distribution for the past two years. However, the weight of the input devices could rarely be reduced to less than 60 grams using conventional methods – that was not easy enough for Zaunkoenig. The M1K, which is handcrafted from carbon fibers, weighs only 23 grams; additional weight savings are even possible through further adjustments.

However, the price of around 250 euros resulting from exotic materials and manufacturing, as well as the compromises to be made when using the puristic little mouse, quickly raised the question of what makes sense – because even when looking at the M1K as a mere shooter tool for ambitious pro gamers, it was The lack of a mouse wheel is often a knockout criterion.

At least at this point, Zaunkoenig is making improvements: With a barely increased weight of 24 grams, the M2K finally also offers a mouse wheel. The lowest possible mass is also a high priority, so the choice fell on a thin plastic wheel with a ceramic surface – the latter should ensure high adhesion, but weighs less than the rubber coatings that are often found at this point, for example. Meanwhile, an Alps model is used as the encoder, while Zaunkoenig uses the D2F-01F manufactured by Omron in Japan for a middle click – as with the primary buttons. The microswitches have gold-plated contacts ahead of their common Chinese counterparts and are – as with the M1K – connected to the PCB via three contacts, which should prevent unwanted double clicks.

Another improvement relates to the connection of the latter to the computer’s CPU: The M2K supports a high USB query rate of 8,000 Hertz via USB 2.0 Hi-Speed, even though the mouse is set to 1,000 Hertz in the factory for compatibility. Switching to the higher frequency, which is superior in terms of use in shooters, is possible with a key combination and without installing software. There are also changes to the chassis: Instead of a carbon structure on a plastic base plate, the M2K consists of a carbon fiber unibody. According to Zaunkoenig, the new production offers three times the stability.

The other characteristics of the M2K meanwhile almost unchanged from the M1K, only with the costs a significant change can be announced: The price increases from 250 euros to 299 euros, whereby it should be noted that the limited edition M1K initially only offered by Kickstarter -Financing, but in return it was available for as little as 150 euros.

The M2K, on ​​the other hand, should be available on the manufacturer’s website later this evening. Zaunkoenig is the second manufacturer in the world to bring an 8,000 hertz mouse onto the market; before AtomPalm with the Hydrogen and only after Razer’s Viper 8KHz (test). The first deliveries are to take place at the end of April.

Telekom: 360 and Audiobooks from Deezer for free at StreamOn &...