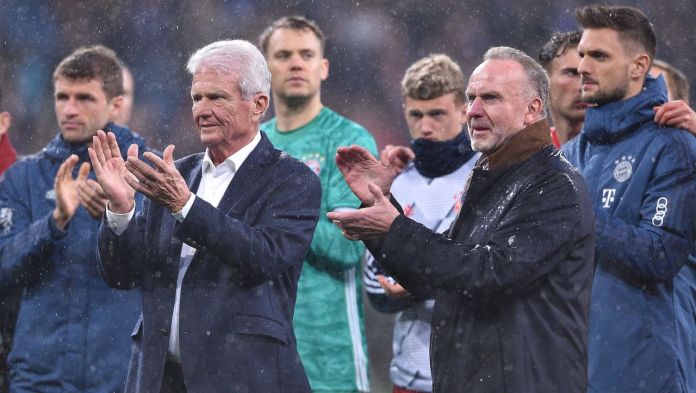 In January 2020, ZDF presenter Jochen Breyer had an outside appointment. He led through the New Year’s reception of TSG Hoffenheim as conférencier, TSG then stated: “The ZDF presenter ensured an intimate atmosphere and a good mood among the guests.”
You should know about the prehistory when ZDF broadcasts a film on the Dietmar Hopp cause (“The Trial. How Dietmar Hopp became the ultras hate figure”) on Saturday evening. Because the author of the film is called Jochen Breyer. And because the film itself does not refer to the dual role of the ZDF journalist.

More than a blemish

Breyer himself told the NDR, which had taken up this conflict of interest as a topic, that he would no longer take on such assignments as the New Year’s reception in the future and that he had “to be honest, underestimated the external effect.” The fact that this is not addressed in the film itself is more than a blemish. Several times in the course of the 45 minutes there would have been the opportunity to make this transparent.

The film itself, which Breyer made together with the journalist Jürn Kruse, has really not become a piece of devotion for Hopp. On the contrary: with numerous interlocutors from Uli Hoeneß to two representatives of the Bayern ultra group »Schickeria«, Breyer and Kruse put together the picture of how the escalation in Sinsheim could come about on February 29 of the previous year. And what part of it, Hopp himself and the German Football Association.

Breyer accompanies a Munich Ultra who was sued by Hopp and his lawyer Christoph Schickhardt before the district court in Sinsheim, one of numerous cases in which Hopp has brought fans, who he feels exhausted by, to court. In the film, Schickhardt calls Hopp “a man of the people, the last real football fan”.

“The commercialization of football is through”

On the other hand, Breyer lets Jan-Henrik Gruszecki appear, who has been BVB Ultra for years and is now a consultant to managing director Hans-Joachim Watzke at Borussia Dortmund. Gruszecki calls Schickhardt a »agitator«, with the criminal charges against the fans he has »opened a Pandora’s box«, he says and asks the question: »Are insulting chants punishable in football?« Gruszecki names the difference between Hoffenheim and BVB like this: Dortmund had earned his status in the Bundesliga over many years, Hoffenheim, on the other hand, only played at the top because of Hopp’s money: “TSG Hoffenheim’s natural limit is in the association league.”

Schickhardt can only shake his head at such differentiations: “The commercialization of football is through.” Although unconsciously or consciously he takes up what is perhaps the best-known phrase from Breyer, who once asked Dortmund coach Jürgen Klopp after a first leg defeat in the Champions League: “That’s the thing through, right? ”

Between the two poles Schickhardt and Gruszecki, Breyer seeks his way through this quite complicated story. It is only very easy for Hoeneß. In the direction of Breyer, he says: “You always try to understand both sides. There is nothing to understand here. Dietmar Hopp didn’t do anything. ”

Nothing at all? The film traces in detail how sensitive Hopp was to criticism years ago. When the Mainz manager Christian Heidel criticized the Hoffenheim model in 2007, Hopp wrote a letter to the DFL, equating the criticism with “discrimination”, culminating in the demand that such statements should be “sanctioned” and treated as if they were racist Utterances.

That is one of the pretty details that the film unearths: like the fact that national player Timo Werner was also called a “son of a bitch” by Hoffenheim fans. Or that Hoeneß was informed about the upcoming actions of the Ultras at a meeting of fan representatives days before the Sinsheim scandal. When asked whether he had passed this on to his old friend Hopp in advance, the Bayern honorary president poked around: Everyone knew about it. The supposedly spontaneous outrage of those responsible for Bayern after the action of the Bayern Ultras reads very differently in retrospect.

The film also unearths exciting things from the inner workings of the DFB: Ex-President Reinhard Grindel, whom Breyer interviewed in a proper clubhouse, reports on the conflict in the association when it comes to the subject of collective punishments for insubordinate fans. Grindel decided to suspend it, but there was resistance from his deputy, Reinhard Koch. “My relationship with Koch was not only strained by this decision at the time, it was almost destroyed.” At that time, Koch instead suggested smuggling undercover investigators into the fan blocks, claims Grindel. Koch rejects that.

The fact that Bayern fans reacted so brutally on that day in Sinsheim after the DFB had previously pronounced a collective punishment against Dortmund supporters for insulting Hopp is only logical for Grindel: “Something like that comes from something like that.” You hardly dare to write down, but in this conflict in which everyone has created their own truth, the person who comes across as the most likable in the film is actually Reinhard Grindel.

Hopp himself declined an interview request for the film. Breyer also did not receive a filming permit for the stadium in Sinsheim.

Living in the corona pandemic: tenants are becoming more modest

These Motorola smartphones get Android 11

Kanye West: US rapper is planning his own game – developer...