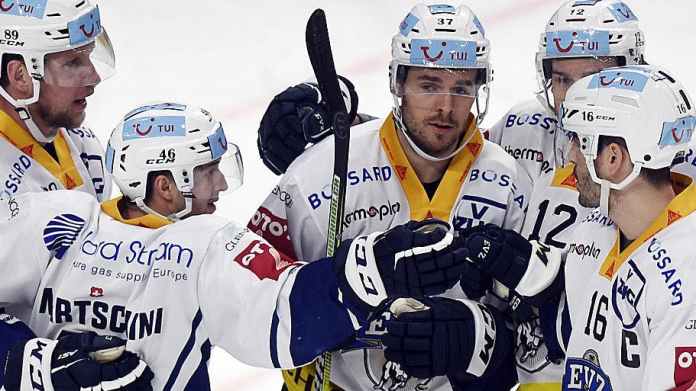 The ZSC Lions are overrun by Zug, Rapperswil wins the important duel against Ambri, Friborg beats Servette, Langnau dives again against Bern and Davos is defeated by Lugano.

EV Zug has already been confirmed as the qualifying winner, but given the strength of the Central Swiss on foreign ice this season, the question arises whether this is really an advantage. EVZ celebrated their 21st success with a 6-2 win at the ZSC Lions in the 25th away game, the ninth in a row.

The Zugers steered the game early on, after 16 minutes they were already 4-0. The last two goals were scored by Carl Klingberg, who also scored 5-2 in the 35th minute. Jan Kovar did the preparatory work for all three goals of the Swede, and the Czech also had an assist in the 6-2 from Sven Senteler (52nd). Klingberg scored three goals in one game for the second time in the National League.

Among the guests, who were successful four times in the power play, goalie Robin Meyer made his debut in the top division. The 20-year-old showed a solid performance and was only beaten twice by Sven Andrighetto, who scored his 26th and 27th goals of the season. The ZSC conceded the eighth defeat in the last nine home games.

On Tuesday, Bern had already led the SCL Tigers 3-0 after eight minutes on the way to a 4-1 victory. This time the Berners showed much more effort, they were 2: 3 behind until shortly before the end of the second period. Ramon Untersander equalized before the second break and a double strike by Inti Pestoni and Jesper Olofsson paved the way for SCB to a 5-4 win and the second derby win this week. As on Tuesday, Tristan Scherwey met twice.

While Langnau lost for the eighth time in a row and for the 22nd time in the last 24 games, Bern won against the bottom of the table in the battle for a place in the playoff round of 16. Coach Mario Kogler’s team has now scored four times in a row. The 2019 champions had never succeeded in doing that this season.

The Rapperswil-Jona Lakers came to a possibly decisive victory in the fight for qualification for the playoff round of 16. The St. Gallen defeated Ambri-Piotta 4-2 away and are now six points ahead of the eleventh-placed Leventines.

The guests’ match winner was Kevin Clark, who scored 3-2 in the 51st minute and made it all clear with a shot into the empty case 34 seconds before the end. It was the 22nd and 23rd goals of the season for the Canadian. Clark is by far the Lakers’ top scorer, but he won’t get a new contract.

The first two goals from 0: 1 (13th) to 2: 1 (34th) were scored by the Lakers in a power play. First, Roman Cervenka (28th), who was successful against Ambri for the fifth time this season, hit with a precise shot, then Nico Dünner distracted unsustainable. The Rapperswil win was okay, they were the more active team. In general, the North Ticino are the Lakers this season, they celebrated their fifth victory in the sixth direct duel of the current championship. Meanwhile, Ambri suffered their eighth loss in their last nine games.

The sixth-placed Genève-Servette fell into a low at the worst possible time. Geneva suffered their fourth home defeat in a row with a 3-2 draw against Friborg-Gottéron and lost for the fifth time in their last six games.

After 40 minutes the shot ratio was 23: 9 in favor of Servette, but the guests were 3: 1 ahead. The goalkeeper Gauthier Descloux from Geneva did not cut the best figure in the 0: 1 from Jordann Bougro (3rd), the 0: 2 from Davis Desharnais (22nd) was preceded by a disc loss from Mathieu Vouillamoz. In the last third, the Geneva dominance was even more blatant with 15-2 shots on goal, but only Linus Omark was able to defeat the strong Freiburg keeper Reto Berra in the power play (51st).

With their second victory within 24 hours, Friborg took a big step towards qualifying for the quarter-finals. It was only the second success for Gottéron in the sixth season duel against Geneva.

Eighth win in a row for Lugano

Lugano remains the team of the hour in the National League. The Bianconeri won in Davos 6: 5 after penalty shootouts and achieved their eighth win in a row. Nevertheless, there was reason for the South Ticino to be annoyed, as they lost a 5: 2 (36th). Dominic Lammer, who had previously remained goalless this season, scored the goals to make it 3-1 (25th) and 4-1 within 174 seconds.

The Davos reaction to the 2: 5 was not long in coming. Yannick Frehner and Magnus Nygren shortened to 4: 5 within 29 seconds in the 39th minute. In the 42nd minute, Enzo Corvi made it 5: 5. It stayed that way. Luca Fazzini, Mikkel Bödker and Troy Josephs scored for Lugano in the penalty shoot-out, and only veteran Andres Ambühl was successful on the Davos side. In the direct duels this season it is now 5: 1 for the Ticino.

The HCD not only lost the game, Valentin Nussbaumer (shoulder) and Lorenz Kienzle (knee) were also injured. Both were taken to the hospital for more detailed examinations, but according to the doctor they didn’t get too bad.

Comments: Genève-Servette without Maurer, Mercier, Richard and Rod (all injured), Friborg-Gottéron without Brodin and Stalberg (both injured). Genève-Servette from 58:40 without a goalkeeper.

FC Bayern with a bonus? These numbers speak against Reus’...

Corona numbers and virus mutations in Stuttgart: This is how the...

Ernst May settlements are to become world cultural heritage

Where testing takes place before Christmas